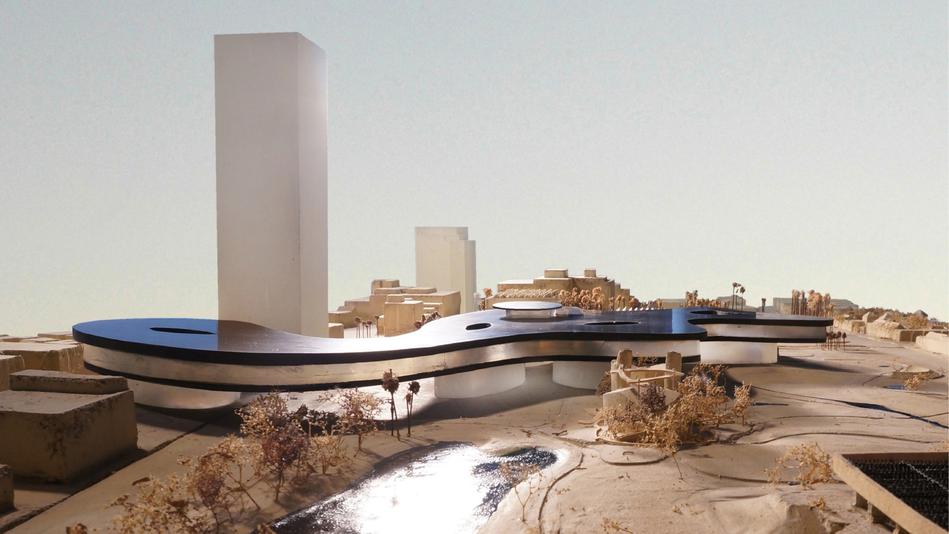 Swiss architect Peter Zumthor has revised his “ink blot” design for the Los Angeles County Museum of Art [LACMA]. The original design received a great deal of criticism for overshadowing the La Brea Tar Pits. The Miracle Mile Residential Association objected to the earlier plan for encroaching on the tar pits and on valuable green space at Hancock Park.

The revised design avoids impinging on the tar pits by spanning Wilshire Boulevard to an anchoring pavilion located on a LACMA owned parking lot on the south side of Wilshire at Spaulding Avenue. This new design retains the original 400,000 square foot single-floor concept, which will be elevated 30-feet above street level.

Although bridging Wilshire would eliminate impact on the tar pits and help to reduce LACMA’s expansion into Hancock Park, the reconfigured plan raises a slew of new questions and concerns for the community.

A New York Times article on the revised design explained: “The museum receives about a third of its $70 million annual operating budget from Los Angeles County and uses county buildings on county land. The City of Los Angeles must approve construction within its limits and air rights above Wilshire Boulevard. Mayor Garcetti and county supervisors were among the first apprised of the design change, suggesting how much this project depends on the support of politicians and governmental agencies.” 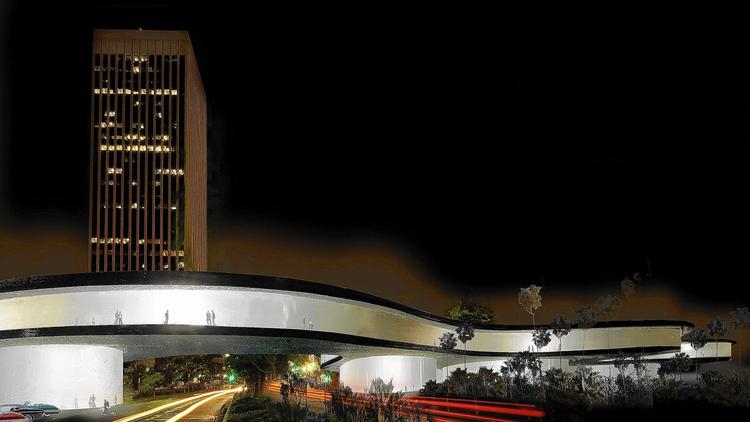 The cost of the project is the subject of speculation. LACMA Director Michael Govan has maintained that the razing of the original museum campus and the construction of the new Zumthor structure – along with an endowment fund – would cost around $650 million. Many architects and experts estimate that the price tag would be closer to $1 billion. The cost of this new design – as well as environmental, seismic, and land use issues – will be analyzed in a feasibility study to be completed in spring 2015.

The New York Times article quotes critics of the design who feel “it would be too dark” — “monolithic” or “cavelike” — for a city as sunny as Los Angeles.” It is a criticism that Zumthor feels he has addressed by creating open-air courtyards in the center of the five glass cylinders that would support the main building.

But Los Angeles Times architecture critic Christopher Hawthorne feels that the revised plan is “perhaps misguided.” Having such a large structure bridging Wilshire had Hawthorne musing on “…what will it be like to walk beneath it? Will it feel like you’re trudging under a freeway overpass? How will the underside of the building be detailed and illuminated?”

It is too early for the MMRA to take an official position on LACMA’s proposal to bridge Wilshire with a new museum. MMRA Vice President Ken Hixon was interviewed on LACMA’s revised plan by The Architect’s Newspaper: “As we’ve painfully learned the devil is in the details. We’re not the design police. We want good design. We want good architecture. But it’s all about the connective tissue.” For now, he [Hixon] points out, such issues — like the museum’s relationship to local housing, available parking, preservation, street life, and, of course, construction—have yet to be specified. An Environmental Impact Report (EIR) for the project is still far off.” 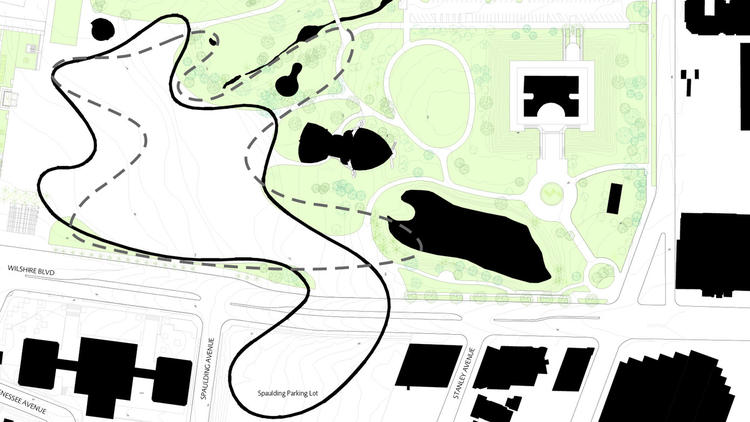 The dotted line shows the original shape of a planned LACMA building, jutting out over a tar pit. The solid line, which stretches over Wilshire Boulevard, is the revised design.

What is your initial reaction to LACMA’s plan – is it a bridge to the future, a bridge over troubled water, or a bridge too far? Take our survey and let us know. We utilize SurveyMonkey for our polls; it is a secure and simple way to gather your input. Poll participants are completely anonymous and your honesty is welcomed. Just click on this link:

New York Times:
A Contemporary Design Yields to the Demands of Prehistory

The Architect’s Newspaper:
For Neighbors, Jury Still Out on Zumthor’s New LACMA Plan