The following projects have been submitted to the Planning Department of the City of Los Angeles for approval.

The Academy of Motion Pictures Arts and Sciences Museum (at the former May Company building):

Carnegie Hill Properties will construct a new apartment complex on the parking lot behind the historic Dominquez-Wilshire building, which occupies the southern block of Wilshire Boulevard between South Cloverdale Avenue and South Cochran Avenue. The project, with the address: 727 South Cloverdale Avenue, will consist of 42 rental units in a four-story structure, 45 feet in height. It will be built above a four-level subterranean garage with 62 residential parking spaces and 184 commercial parking spaces to serve businesses located in the Dominguez-Wilshire building. 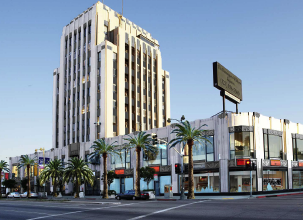 The façade will be constructed of a stone cast material with a strong vertical element to complement the art deco design of the Dominguez-Wilshire building and comply with the guidelines of the Miracle Mile Community Design Overlay District. The project is designed by Lorcan O’Herlihy Architects – who also designed a recently completed 6-unit condominium building at 749 South Cloverdale Avenue.

Representatives of Carnegie Hill Properties made a presentation at the November 7th Miracle Mile Residential Association board meeting. The board of directors responded favorably to the project with the caveat that the limited street parking on Cloverdale and Cochran be protected by prohibiting the tenants of the new complex from securing Preferential Parking or Guest Parking permits. Carnegie Hill officials offered to place language in the leases to that effect. 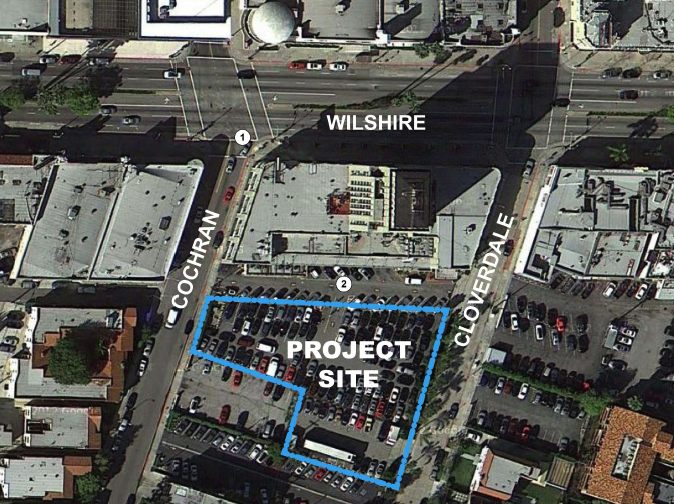 This is the second infill development built on a surface parking lot behind a historically significant Miracle Mile building. Work began in early July on the long-delayed “Desmond’s on Wilshire” project: a 175-unit apartment building being constructed on the parking lot behind the Desmond’s building at 5500 Wilshire Boulevard [see August 2013 Newsletter].

A Brief History of the Dominguez-Wilshire building:

The Dominguez-Wilshire building is an Art Deco landmark located at 5410 Wilshire Boulevard. The property was named after its developers, the Dominguez family – heirs to the first land grant given in California by King Carlos III of Spain. Juan José Dominguez (1736–1809), a Spanish soldier, arrived in California in 1769 and with Junípero Serra traveled to San Juan Capistrano, San Gabriel, and Monterey. Dominguez was granted a concession of 75,000 acres southwest of Los Angeles in 1784 that became known as Rancho San Pedro. 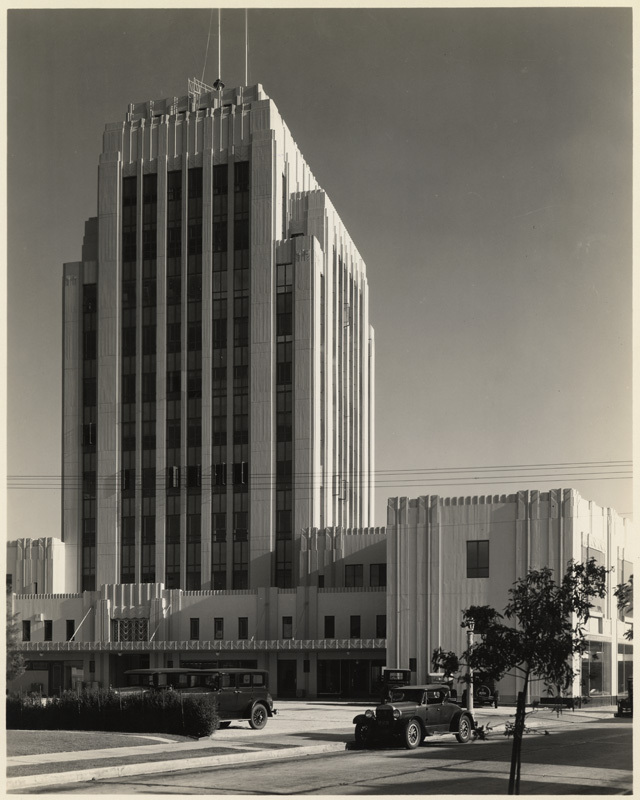 View of the rear of the Dominguez-Wilshire building, circa 1931.
(Courtesy of the Mott-Merge Collection; California State Library.)

In the late 1920s, the Dominguez heirs commissioned the architectural firm of Morgan, Walls and Clements to design a new tower for their Wilshire Boulevard property. They followed the automobile-related concept of the Gilbert Underwood design for the nearby Desmond’s building and included a large parking lot at the rear of the building. Construction was completed in 1930 and clothiers Myer Siegel & Company leased space on the first and second floors. In the late 1930s the Wetherby Kayser apparel store and C. H. Baker, a women’s shoe store, also took up residence.

Dr. John Hiss purchased the Dominguez-Wilshire building in 1958 and for a time it was known as the “Hiss Tower.” Carnegie Hill Properties acquired the property in the late 1990s and launched a full-scale interior and exterior restoration that received a Preservation Award from the Los Angeles Conservancy in 2000.

Work began in early July on the long-delayed “Desmond’s on Wilshire” project: a 175-unit apartment building being constructed on the parking lot behind the Desmond’s building at 5500 Wilshire Boulevard.

The historic art deco building and parking lot property was purchased by Ohio based Associated Estates Realty Corporation [AERC] in May 2012. The acquisition of the 2.2-acre site came with an entitlement allowing for the construction of up to 175 apartments and a parking structure. According to a LA Curbed article published last year, rents will range from $2,600 per month for a one-bedroom apartment to $3,300 per month for a tw0-bedroom unit.

The genesis of this project began in 2005 when the property was acquired for an undisclosed sum by Legacy Partners, who announced plans to build condominiums on the parking lot south of the original building. Legacy negotiated with the City and the MMRA to secure the necessary approvals but never commenced construction due to the collapse of the real estate market in 2008. Legacy sold the building and parking lot to AERC for $37 million. AERC plans to spend $70 million on the new parking structure and apartment building.

The Wilshire Tower, as the Desmond’s building was originally named, was completed in 1929. The 11-story tower with its curved two-story base was designed by architect Gilbert Stanley Underwood. Desmond’s Department Store and Silverwood’s, a popular men’s clothier, were the first tenants in the building. Signs promoting these stores are still in place on at the top of the tower. The success of these retailers prompted downtown merchants to migrate westward to the Miracle Mile and launched a thriving shopping district.

The tower, which was designated a Historical-Cultural Monument in 1987, has long been a popular location for architect’s offices. Today the building’s most prominent tenant is the internationally known Ace Gallery, which has a five-year option to purchase the original building for $20 million.

Los Angeles Business Journal:
Residential Developer Has Lot to Work With in L.A.

1 Response to Projects in Development

This site uses Akismet to reduce spam. Learn how your comment data is processed.