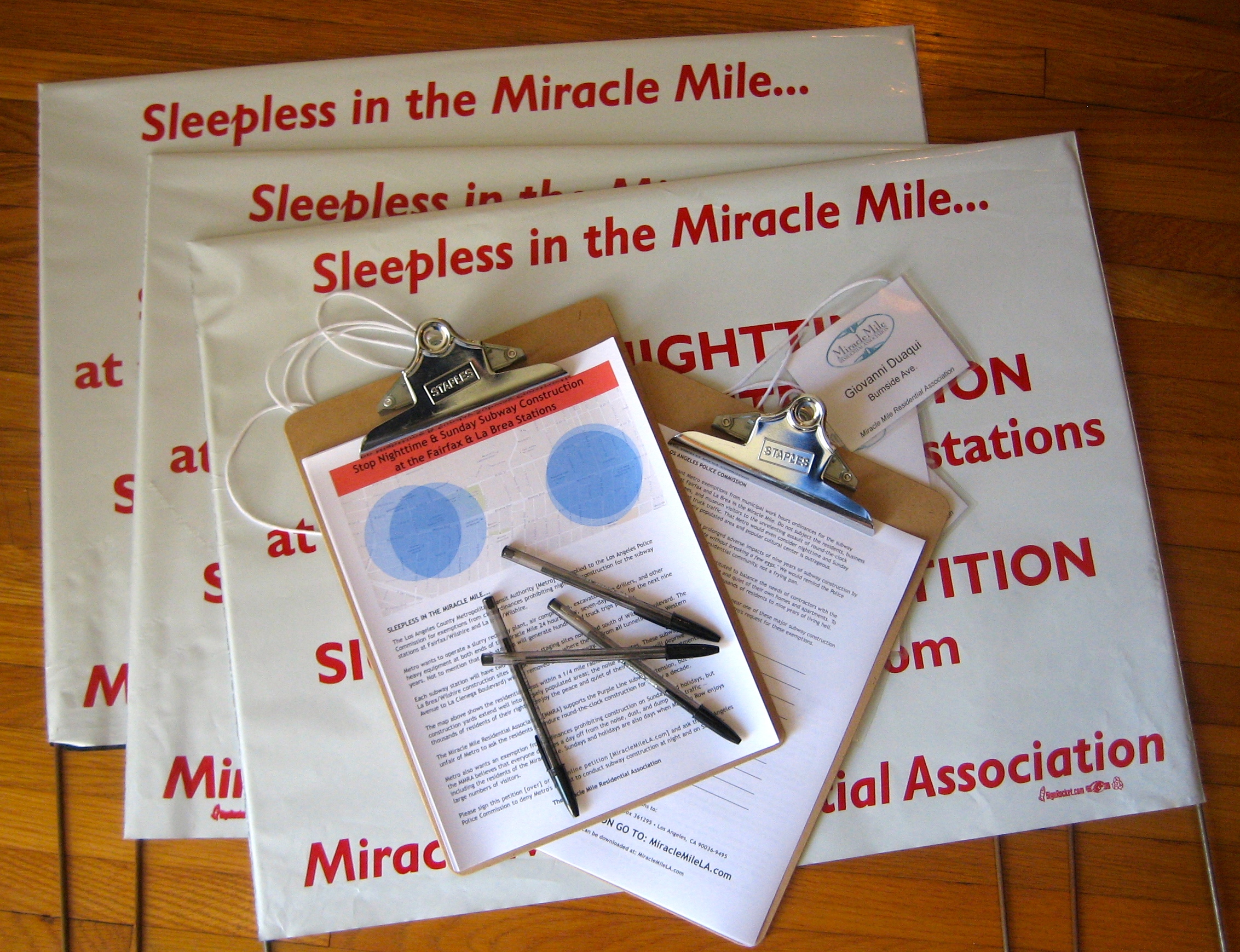 Last month the Miracle Mile Residential Association [MMRA] launched a petition drive to stop nighttime, Sunday and holiday construction for the Purple Line Subway Extension – which is scheduled to begin major work in August. In January 2014 the Los Angeles County Metropolitan Transit Authority [Metro] applied to the Los Angeles Police Commission to be exempted from municipal noise ordinances for subway construction in the Miracle Mile.

MMRA members and volunteers from the community have been distributing petitions every Saturday within the boundaries of the MMRA [see map]. So far about 60 % of the area has been canvassed and the remaining blocks should be completed by March 22. The response has far exceeded expectations and the online petition has proved to be a very effective means of collecting signatures.

The Police Commission has not set a date as to when they will render a decision on Metro’s applications to be exempted from noise ordinances, so the petition drive will be an on-going campaign until further notice. The petition effort has also received significant support from residents in neighborhoods adjacent to the Miracle Mile, who will be equally impacted by nighttime, Sunday and holiday construction. The MMRA has received a number of requests to expand the petition campaign beyond our boundaries and this be will taken this under serious consideration once the canvassing of the MMRA area is complete.

The petition campaign has attracted media attention and MMRA President James O’Sullivan and Vice President Ken Hixon have been interviewed by the Los Angeles Times for a story they are preparing about the impact of subway construction on the Miracle Mile. The Times also interviewed the owner of an apartment building located near the Fairfax subway station construction site, as well as a long-time resident on nearby South Orange Grove Avenue.

Metro is battling our efforts to stop around-the-clock construction by accusing the MMRA of being “against the subway.” This allegation could not be further from the truth. The MMRA whole-heartedly supports the extension of the Purple Line. Our issue with the subway expansion is solely about nine years of constant nighttime, Sunday and holiday construction noise and disturbances.

The Miracle Mile is one of the most densely populated urban corridors in the nation; we must stand together to remind Metro that we are a residential community and not a full-time construction zone.

On March 3, 2014 the MMRA sent a letter to the Los Angeles Police Commission clarifying our position. The MMRA believes the burden should be on Metro to demonstrate why the residents of the Miracle Mile are unworthy of the protections of a well-established ordinance that protectsall residents of Los Angeles from 24/7 construction activities. We encourage you to read this letter; it makes a concise and strong argument why it is premature for Metro to seek to be exempted from the noise ordinance at this time [click here].

The Subway Construction page on the MMRA website contains a lot of details and information with maps of the Fairfax and La Brea stations and construction staging sites. It also includes YouTube videos of tunnel boring machines in action.