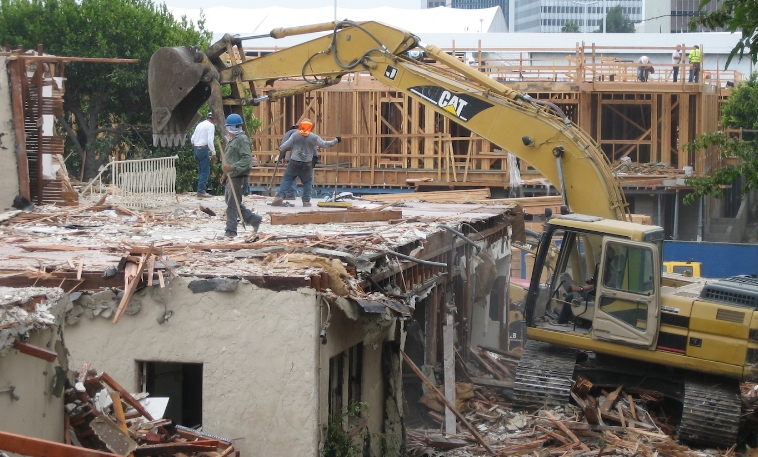 A tidal wave of complaints about mansionization – and the inability of the existing Baseline Mansionization Ordinance [BMO] to stop the spread of McMansions – has prompted the City Council to propose a stopgap measure to protect neighborhoods under attack. A plan presented October 7th at the City Council’s Planning and Land Use Management Committee would impose temporary restrictions to stop or limit demolitions in areas with pending applications for either a Reduced Floor Area District [RFA] or Historic Protection Overlay Zone [HPOZ].

The Miracle Mile Residential Association submitted a request to create a RFA to Councilmember Tom LaBonge on September 13th. LaBonge appeared at the City Council committee to place the Miracle Mile on the list of neighborhoods to be included in the proposed Interim Control Ordinance [ICO].

The ICO – which is still to be finalized before being brought to a vote of the full City Council – would prohibit all single-family home demolitions while allowing only interior remodels that retain all exterior walls and roofs orfeature a less restrictive option that could allow complete demolitions but limit new structures to 120% of the size of the previously legally existing structure. Either measure would effectively stop mansionization, but MMRA President James O’Sullivan and Vice President Ken Hixon informed the committee that the MMRA preferred the first option prohibiting single-family home demolitions entirely.

Nearby areas to be included on the list of protected neighborhoods are La Brea-Hancock and North Beverly Grove, which – like the Miracle Mile – are seeking RFA status, and Carthay Square, which has been waiting nearly four years for approval of its HPOZ. Staffing cuts to the Department of City Planning have created a logjam of pending RFAs and HPOZs. Developers have been exploiting this backlog to quickly build McMansions before protections are officially implemented.

An ICO is a temporary ordinance that is renewable in six-month increments for up to two years. It would stop mansionization in the most vulnerable areas and give the city time to reform the BMO and tighten zoning rules so that neighborhoods could have more say about the density and scale of new home construction and remodeling.

The ICO would protect the Miracle Mile while our RFA is developed and HPOZ protection is pursued. The proposed ICO clearly has the support of the entire City Council and it is anticipated that it will be approved and implemented by the end of the year.

Los Angeles Times [Editorial]: L.A. is Bogged Down in Trying to Save Its Historic Structures