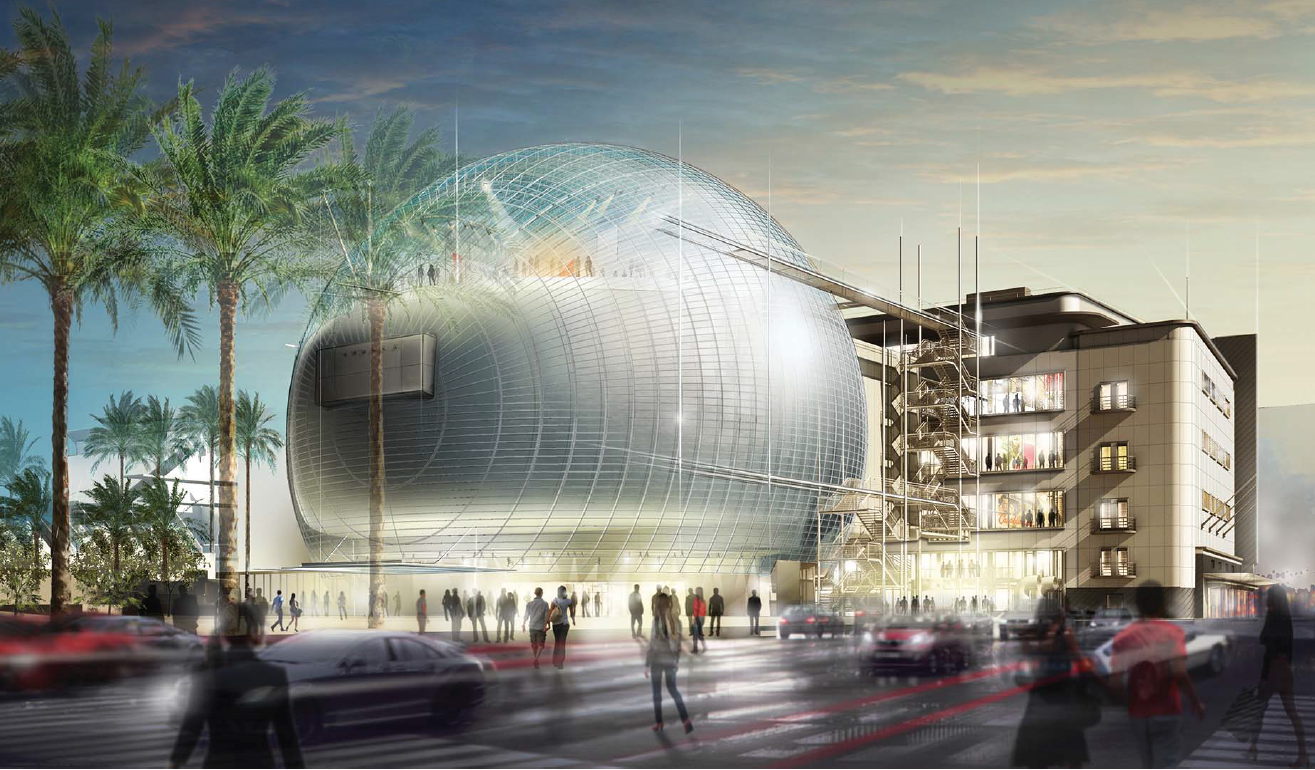 The Miracle Mile Residential Association [MMRA] has submitted its comments on the Draft Environmental Impact Report [DEIR] for the proposed Academy Museum at the former May Company site. The nearly 7,000-page DEIR was released on August 28, 2014. The 45-day commentary period closed on October 14, 2014.

The DEIR highlights the scale of the Academy Museum project:

The DEIR is a very lengthy and complex legal and technical document that is difficult to concisely summarize. (For an in-depth view, follow the links below to see the MMRA’s comments to the DEIR and our independent traffic expert’s assessment.) The MMRA objections to the project center on traffic congestion, traffic and parking intrusions, infrastructure, public services, and the overall impact of locating a major special events center in a heavily congested and densely populated residential area.

Here’s the backstory.  In the mid-2000s the Academy of Motion Picture Arts and Sciences [AMPAS] began aggressively acquiring parcels in Hollywood as a future location for a museum. Working with the now defunct Los Angeles Community Redevelopment Agency, which wielded its power of eminent domain, AMPAS secured a full city block south of Sunset Boulevard on Vine Street. Including other parcels, as well as their holdings at the adjacent Pickford Center of Motion Picture Study, AMPAS assembled approximately 8 acres.

Then, with the stock market crash in 2008 and ensuing recession, AMPAS’s fundraising campaign for the Hollywood museum site derailed. They were left holding a large parcel that was suddenly worth much less than they had paid.

Three years later the dream of an Academy museum was revived. In 2011 AMPAS signed a long-term lease to take over the former May Company from Museum Associates, which operates the Los Angeles County Museum of Art [LACMA].

This preamble about AMPAS’s thwarted plan to locate a museum in Hollywood is relevant because it spotlights what is so obviously wrong with their plan to locate the Academy Museum in the Miracle Mile: They are trying to fit all of their grand plans for an 8-acre project in Hollywood into a mere 2.2 acres at the May Company site.  It is not an easy fit.

AMPAS has had to resort to slight-of-hand in the DEIR to create the illusion that an Academy Museum is compatible with the Miracle Mile – so that they can preserve their objective to be a major tourist attraction and special events center. But the only way they can do that is to minimize its true impact on the community.

A 2008 Traffic Study for the proposed Hollywood museum location projected 7,800 visitors per day. The DEIR for the May Company location projects only 5,000 – for a total of 860,000 visitors per year. Museum experts not connected to AMPAS predict that the project will easily draw at least 1 million visitors annually, if not match or exceed LACMA’s current annual attendance of 1.2 million visitors.

Why does AMPAS claim that the Miracle Mile location will attract 2,800 fewer visitors per day than the former location in Hollywood? Answer: To justify the lack of any new on-site parking. In Hollywood AMPAS was going to build a 5-story parking facility with 850 spaces; at the May Company site they propose none.

But even with this miraculous reduction in the number of visitors, AMPAS still needs to conjure hundreds of visitors arriving on foot, bicycle, or wandering over from LACMA, to cram down their numbers to meet city-mandated parking requirements.

The DEIR tortures visitor projections and parking discounts so that it will support its most important finding: That there is already adequate parking at LACMA’s underground Pritzker garage and Spaulding surface lot for the Academy Museum to share parking with LACMA.

This defies reality. The residents in areas adjacent to LACMA have endured the parking and traffic intrusions of LACMA visitors for decades. Everyone knows that LACMA doesn’t have enough parking. The “Full” sign is up almost every weekend at the Pritzker garage and Spaulding Lot. But according to the DEIR, LACMA has hundreds of existing parking spaces to spare.

In truth, the Academy Museum is as much a major special events center as it is a museum, with 87,000 square-feet devoted to theaters, events space, cafes, and a store and 84,000 square-feet for exhibitions areas, collections, and exhibit support.

As stated in the DEIR, the primary purpose and objective of the project is “…providing film screening and premieres in a state-of-the-art theater competitive with venues in size and amenities.”  Translation: The museum hopes to steal some of the audience, and wrestle some of the revenue, from such popular film premier venues as the Chinese Theater, the El Captain, and the Cinerama Dome. The list of additional events, besides film premieres, includes Academy member and public film screenings, traveling shows, concerts, performances, cultural programming, spoken word productions, classes, video and press events, and film festivals. Each of these will attract anywhere from 100 to 1,325 attendees.

From the blare of rooftop movie screenings to the glare of digital signs that violate the Miracle Mile Community Design Overlay, to the onslaught of traffic and nightly events, the MMRA has concluded that the Academy Museum doesn’t fit the Miracle Mile. With all due respect, it should go back to where it came from: Hollywood. That’s where it was originally supposed to be. And that’s where tourists expect to find it.